Have a Toast in Cassis

In the tiny appellation of Cassis, some of the most distinctive white wines are produced on less than 500 acres of land. Here the grapes grow in limestone soil on the cliffs along the coast of Provence in southeastern France. In addition to the ideal soil, the geography of Cassis contributes to the excellent growing conditions for the vines. Protected from the northern and western winds, the vines are kept warm through much of the season.

The wines this coastal village bear no relation to Crème de Cassis, the popular liquor made from black currants, nor the flavor descriptor “cassis” which is used to describe the flavor of black currants in wine. Cassis vineyards produce both red and rosé wines, the majority of their production is white wines. The white wines are known for their strong herb aromas and full-bodied flavor.

Much of the wine produced in Cassis never reaches outside of the region, due to the appellations small size and production, making a glass of this wine of strong character all the more special for those who visit! 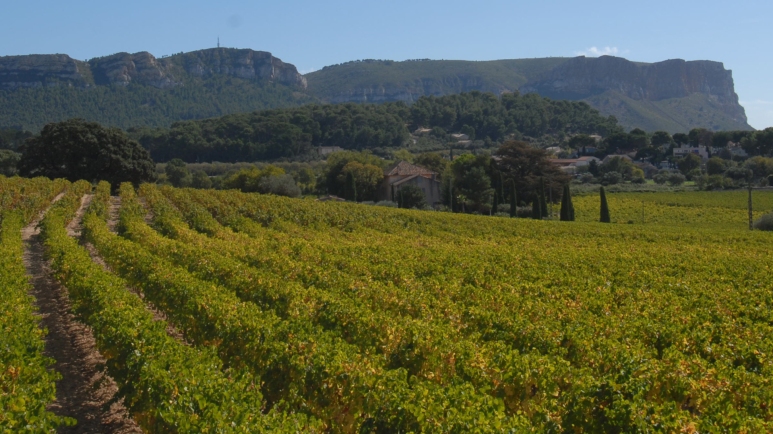 More than 2 600 years ago the Phocéens (people coming from the city of Phocée in ancient Grece) arrived on the southern coast of France and founded the city of Massalia, nowadays known as Marseille, one of the main cities of the Mediterranean coast.

They brought with them the first vines (“ugni blanc”) and planted them in the Cassis Bay. Later, the Romans kept this tradition and started producing more and more wine in the South of France, sending the local production by boat in every city of the Empire. Nowadays you can still find many ancient amphorae in the Cassis Bay!

We know about the Greek and Roman production thanks to the many archeological remains found all over Provence and in Cassis, but the first written traces of the wine production in the city date back to the Middle Age.

A local texte from 1381 talks about a vineyard located in the part of the city known as “The Arena”, next to the beach.

From this small town on the Mediterranean coast, the vineyards have grown and expanded all over Provence!