The Siena’s Palio is one of the most ancient Italian traditions still alive, dating back to 1700. Even if it basically consists in a horse race taking place in Piazza del Campo, for the people of Siena it’s much more than that ! 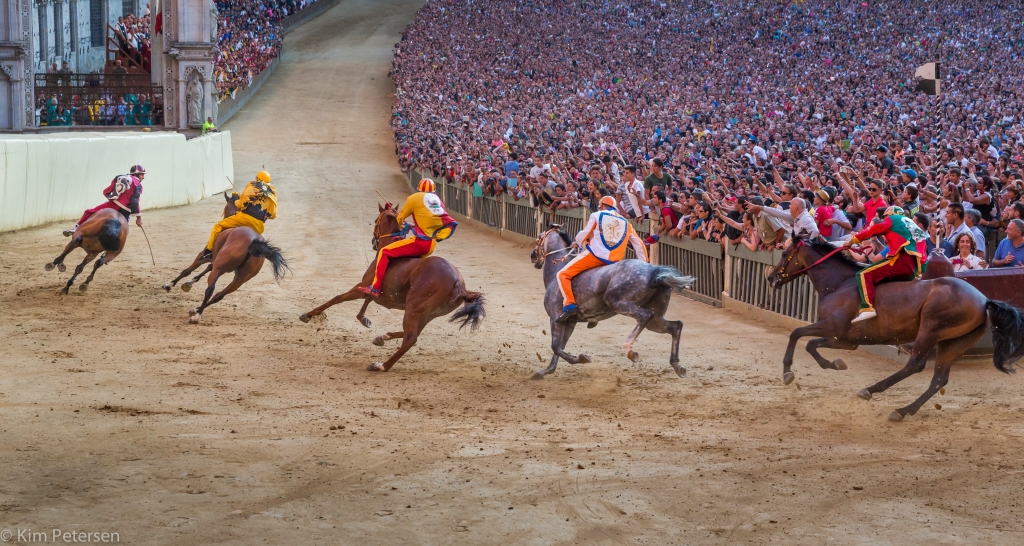 Short history of the Palio

The Palio was first run in Siena in 1701 to honor the holy apparition of the Virgin Mary in the city. The Madonna dell’Assunta is often celebrated in Siena since 1260, when it is said that she protected the army of the city during a battle against Florence…yes they didn’t really liked each others in the past !

This tradition is related to the division of the city in different districts called Contrade, and guess what, they don’t like each others too ! A real antagonism exists still nowadays between the Contrade, and in the past it was even worst !

Today Siena is divided in 17 Contrade (59 in origin), each one with its own name, coat of arms, patron Saint, colors, and even a small council. The Contrade often have animal names such as Chiocciola (snail), Pantera (panther), Civetta (owl), Aquila (eagle), or others related to the natural world as Onda (wawe) and Selva (forest).

The Contrade are gathered in tree Terziere which represents the tree main ancient areas of the city. Today only 10 Contrade run the Palio, mainly for security reasons. The Palio always takes place in the Piazza del Campo, the main square of Siena.

What happens during the Palio?

Even today the Palio is one of the main cultural event taking place in Italy. People from all the country and from all the world come to see this magnificent spectacle, reminding us of our traditions.

The Palio takes place twice in a year : first on July 2nd, than on August 16th. The preparation takes several days, during which the Campo Square is completely modified. First a layer of earth is spread all around the place to prepare the track, than some mattresses are placed against the main walls of the square to protect the jockeys in case they fall. The Palio is a real hard game, in the past many participants were injured and some even died, but it was for the honor of their own Contrada !

Before the Palio, a magnificent parade takes place : the Contrade march all together, each one with its banners, drummers, riders and the jockey. Than the race begins ! In the evening, at 7:30 pm the detonation of an explosive gives the signal that the race is about to start (if you want to see the race, plan to be on the square quite early, it’s always very crowded!).

The horses and the jockeys get ready to enter the square and when the last one is in the race starts. The jockeys can use their whips for their horses and even to disturb the other riders ! In fact in the Palio the winner is the horse, not the man. A horse can win the Palio without its rider, this case is called cavallo scosso in Italian. The winner is awarded a banner of painted silk called Palio which is hand-painted by a different artist for each race. 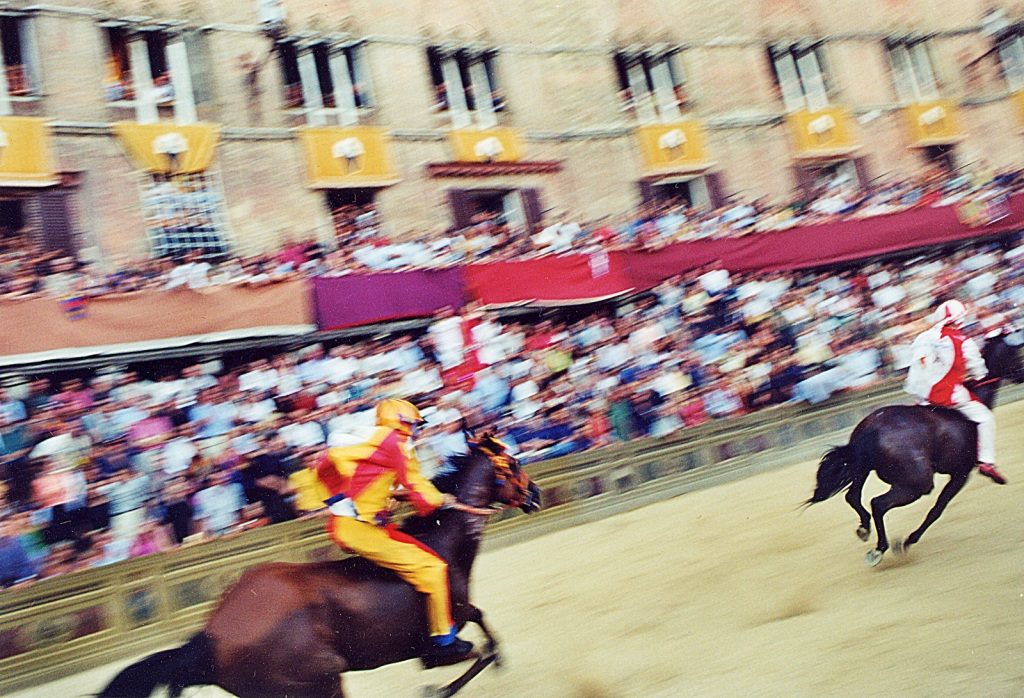 The manifestation ends in the streets of the winning Contrada an last late in the night.

If you have the chance to be is Siena or nearby during the Palio, you should definitely go there and take part to the festivities. It is a unique chance to get in touch with the local people and learn more about this several hundred years old tradition and part of the Italian culture, still alive nowadays !