5 Foods to Try in Brittany

Over the centuries, France has become known both for the exquisite fine wine produced there and the indulgent and unique cuisines found throughout the country. The beautiful region of Brittany is no exception to this, boasting a decadent list of local delicacies that draw residents and tourists alike to delight in the unique tastes of the area. In fact, whether you’ve got an experienced palate for gastronomy or simply enjoy trying new things, tasting the food in France is as much a part of the experience as visiting the Louvre or snapping pictures of the Eiffel Tower. If you’re planning a visit to the Brittany region, here are five foods to take note of and add to your must-try list.

This authentic seafood dish has been a popular one in Brittany for many years, and can easily be found on the menu of just about any restaurant throughout the region. It is prepared with specially cultivated mussels which are small, yet incredibly fleshy and rich in flavor. The shellfish are cooked in a concoction of French white wine, parsley and shallots. The resulting mouthwatering dish is then served in bowls or pots (depending on the amount you order), and paired with a delicious Muscadet wine. Your taste buds will think they’ve died and gone to gastronomy heaven! 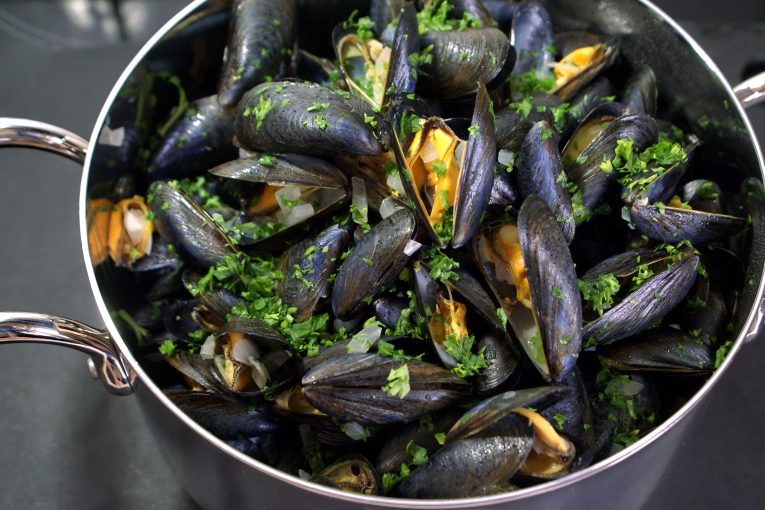 This delicious Brittany dessert, sometimes called a French Butter Cake, is as rich with flavor as it is with decadent ingredients. Kouign Amann is a round cake that is made with bread dough, but features layers of butter and sugar folded in. The cake is then baked slowly, which allows the dough to puff up and the sugar to caramelize. The result is similar to a puff pastry, only with fewer layers. It is believed that this incredible treat was discovered by mistake, the result of a failed batch of bread paste. Whatever its origins, Kouign Amann is an absolutely delectable way to finish a meal, especially when it’s paired with a glass of local Brandy. Just be sure to save room – it’s quite filling!

When it comes to old-fashioned and traditional fare, Far Breton is likely to appear at the top of the list. This dense pudding dish dates back to the 18th century, but it is still widely celebrated as a dessert for family events, holidays and other celebrations. This tasty French custard tart is typically filled with prunes or raisins, and although it’s been adopted and is widely enjoyed throughout the entire country, its roots are firmly planted in the Brittany region. Far Breton is delicious on its own but is also nicely complemented by fresh cottage cheese or various fruit marmalades. 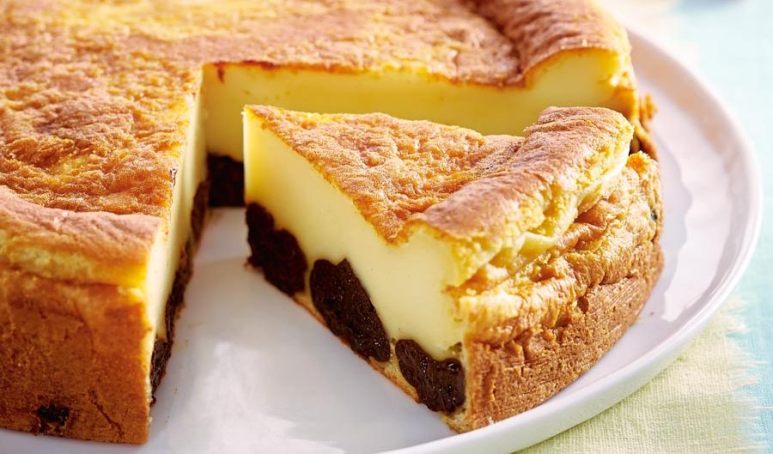 The gourmet French Galette is often compared to its thinner counterpart, the crêpe. Although they are prepared in a similar fashion, unlike crêpes, Galettes are made from buckwheat and tend to be much thicker and moister. They are essentially buckwheat flour pancakes. Galettes are often garnished with other tasty ingredients such as egg, ham, fish, vegetables, cheese, or fruit. Of course, no Galette is complete without a glass of Breton cider to accompany it, which is a delicious sweet sparkling cider made from apple juice.

If you enjoy seafood dishes, a sampling of Cotriade is a must during your visit to Brittany. Cotriade is a savory fish stew which is made using a variety of different types of fish as well as potatoes to make it heartier. Cotriade is sometimes mistakenly compared to bouillabaisse. The main difference between the two is the fact that unlike bouillabaisse, Cotriade does not contain any shellfish. This mouthwatering stew is usually served with a fresh toasted baguette and can be enjoyed widely throughout the Brittany region.

The French region of Brittany is known for many things, from the breathtakingly beautiful countryside to spectacular feats of architecture and a unique culture that set it apart from other regions in the area. Perhaps there’s no better way to experience this magnificent region than through your taste buds. These five foods embody the area’s rich gastronomy that, like so many other things, is steeped in tradition and rich in both flavor and personality. There’s simply no better way to experience this delicious destination!